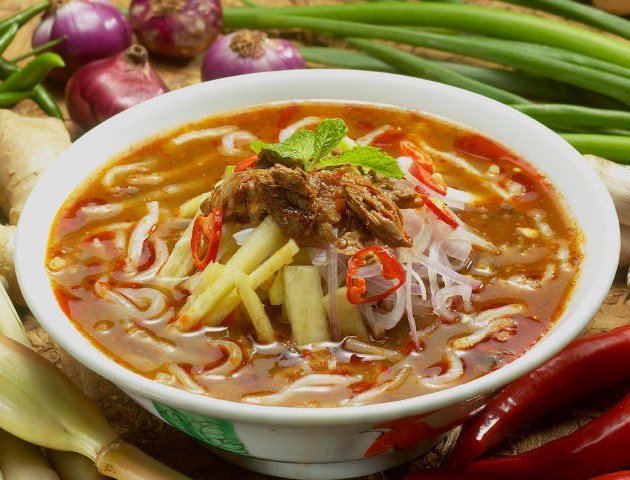 The Peranakan or Baba-Nyonya – descendents of 15th and 16th century Chinese immigrants to the Malay Peninsula – are known for their unique culture, which merges elements of Chinese and Malay customs. While many aspects of Peranakan culture are disappearing amidst modernity, one thing will always remain inseparable from Malaysian life; Peranakan food. An exquisite marriage between traditional Chinese ingredients and cooking methods with Malay spices, Peranakan cuisine is famous for its heavenly flavors. Perhaps the Peranakan’s most significant contribution to the culinary potpourri of multicultural Malaysia is the noodle soup dish, called Laksa.

The etymology of the word Laksa remains unclear, although there are several notable theories. One such popular speculation is that the word originated from the Hindi-Persian, ‘lakhshah’, which is a type of vermicelli. The word may also have derived from the Chinese word, ‘la sha’, literally meaning ‘spicy sand’, attributing to the Laksa soup’s spiciness and its sandy, gritty texture from the ground prawn paste. Another theory has it that due to its murky appearance, the dish got its name from the word ‘la sam’, which means ‘dirty’ in the local Hokkien dialect.

There are two general variants of Laksa; the curry Laksa which consists of wheat noodles in coconut curry, and Asam Laksa which is rice noodles in tangy fish broth. Being one of the well-known cuisines of the country, there are several versions of the curry and Asam Laksa, depending on region. However, the most famous Laksa is said to be from the northern region, particularly the Penang version of Asam Laksa.

Also known as Nyonya Asam Laksa, the Penang version is arguably the most authentic in its ingredients and taste as a Peranakan cuisine. As its name suggested, the key ingredient that gives the Laksa soup sourness is Asam, which is the Malay word for tamarind. For extra sourness, certain recipes also add dried slices of Asam Gelugor, a type sour mangos teen native to Malaysia and Thailand and not to be mistaken for tamarind. Of course, such a savory flavor could not have come from a couple of ingredients. In fact, the tangy and spicy taste of the Laksa broth came from an assortment of tropical herbs and spices, including galangal, lemongrass, turmeric and ground chilies. To compliment this unique blend of spices, flaked fish – ideally wolf herring, sardines or chub mackerel – is added to the mix to give the soup a salty taste. For enhanced flavor, the Penang Asam Laksa also adds a type of prawn paste, known as ‘heh ko’ in Hokkien.

Unlike other Laksa variants that use yellow wheat noodles or vermicelli, Asam Laksa uses thick and springy noodles made from rice, sago and tapioca flours. Despite the myriad of ingredients in the soup, no serving of Asam Laksa is complete without toppings of sweet pineapple, fragrant mint leaves, ginger buds, sliced red chilies, crunchy cucumber, onions and lettuce.

The Penang Asam Laksa holds a special place among Malaysian, not just as a culinary delight, but also its interracial origins represents what Malaysia as a country stands for: multiracial harmony. So well-loved is the  Nyonya Asam Laksa that it can be found practically everywhere, from roadside hawker stalls to restaurants, especially in the northern states of Penang, Kedah, Perlis and Perak. It has been said, though, that the best Asam Laksa in the country is served in a stall at Air Itam Market in Penang, which is a short walk from one of the islands famous tourist attractions, the Kek Lok Si temple.

As a further testament to its popularity and uniqueness, the Penang Asam Laksa earned the seventh place on the World’s 50 Most Delicious Foods list compiled by CNN GO in 2011. It was also chosen as the second must-taste hawker food in a poll conducted by the VisitPenang website in 2009. Given its exotic flavor and availability, a Malaysian culinary adventure should not be considered complete without indulging in a bowl of Penang Asam Laksa.