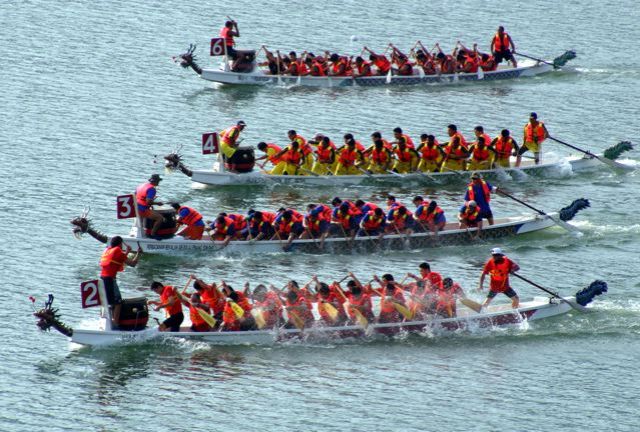 Although the Dragon Boat Festival originated in Chinese culture, it has since spread to Malaysia and other surrounding areas via Chinese immigrants. If you happen to be in the country during the festival, then this is one of the most exciting things to do in Malaysia.
Historically, the Dragon Boat Festival is celebrated by Chinese communities during the fifth day within the fifth lunar month each year. It is also known as the Duanwu Jie Festival and commemorates Chinese poet and patriot Qu Yuan who committed suicide when his home kingdom was conquered by a rival state.

The story says that Qu Yuan’s countrymen used a boat to get out to the river and retrieve his body, which has led to the dragon boat races. At the same time, others distracted the fish with rice packets and this is the origin of the zongzi, or rice dumplings.
The Dragon Boat Festival in Malaysia is one of the best places to visit in Malaysia as it also includes a race. Each boat is designed in the traditional style and will be very eye-catching with their traditional Chinese dragon head and tail.

One of the most interesting places in Malaysia to be during the Dragon Boat Festival is Penang as this is where the largest event occurs. It is locally known as the Penang International Dragon Boat Festival and occurs at Teluk Bahang Dam within Penang. This has been the venue for the festival since 2002 and allows safety as well as beautiful views of the racers.

The first dragon boat race in Malaysia took place in Penang along the water near Gurney Drive. The international attention began in 1979 and since then participants have included rowers from over 60 countries around the world.

Other races take place in Putrajaya, Sabah, and Malacca. The races in Sabah and Putrajaya also include special categories for cancer survivor teams. All races are organized and run by the Malaysia Dragon Boat Association (MDBA) which also aims to increase the popularity of this sport. There is also a Twin City Race that occurs in Malacca and Putrajaya which has seen more than 2,000 participants originating from 25 countries every year.

The Dragon Boat Festival and the related races began with the Chinese communities within Malaysia but over time they have expanded. Today it is seen as a great community event and people of all ethnicities within the country attend. It even attracts many international visitors and has become one of the most popular tourist attractions in Malaysia. The races have actually expanded so much that each year there are several international teams that participate as well.

You do not have to pay any entrance fee to watch the Dragon Boat Races or attend other events that make up the Dragon Boat Festival and you can choose which location to attend the events in. Penang and Putrajaya are the most popular destinations for this festival.

Despite its growth as a tourist attraction, the Dragon Boat Festival is still a Malaysian tradition rooted to their culture. It is an important part of the history and culture of the country and therefore you should take the time to respect and understand the traditions instead of simply enjoying them. Respect the natural areas you visit during the festival, including those near the race sites, as this will preserve them for future generations.