Fort Cornwallis – A Rich Heritage Site to Visit in Penang 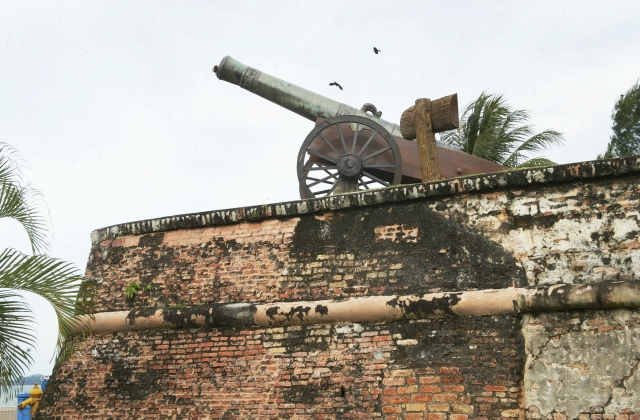 A trip to Georgetown in Penang is incomplete without a visit to the beautiful and imposing Fort Cornwallis. Located along Penang’s northeast coast, this fort is a very popular tourist attraction and is one of the important places to visit in Malaysia.

Fort Cornwallis History – This fort was constructed in 1786 by Sir Francis Light after Penang Island was usurped by the British government from the Sultan of Kedah. Shaped like a star, this fort was created with palm trunks and its original purpose was to protect the Penang Harbor from the French, from pirates and from Kedah, the former owner of Penang.

In 1804, the Napoleonic Wars were in full swing. On top of this, Penang faced threat in the form of pirate attacks. In order to safeguard the Fort and strengthen it, Francis Light used bricks to reinforce the walls with the help of the Indian convicts. Around the fort, a moat 27 foot wide was dug. In 1920s, a malaria outbreak resulted in draining of the moat and filling it with soil.

Sir Francis Light paid from his own coffers for enhancing Fort Cornwallis in 1809 as the East India Company refused to fund the construction. It was then that the 17 cannons were set in fortified positions at the fort.

The British used this fort as its administrative center in Penang. An interesting fact is that Fort Cornwallis has never been engaged in a battle. If you are looking for interesting things to do in Penang, you can visit this fort and enjoy exploring it.

What to do in Penang – Exploring Fort Cornwallis

Inside Fort Cornwallis, you can find three original structures and a number of signboards with information on the history of the fort and its influence on Penang.

Gunpowder Magazine – This is the bunker where gunpowder used to be stored. This structure located in the northwest corner of the fort was constructed in 1814 in such a manner that ammunition for the Seri Rambai Cannon and other seaside cannons was always close at hand.

Stockade Cell – Wear light clothing if you are planning on walking through the Stockade Cell with its claustrophobic rooms as it can get very hot especially during afternoons. These rooms originally housed the artillerymen but later served as a prison.

Chapel – The small chapel inside the fort holds the distinction of being the first constructed chapel in Penang Island. This ancient colonial structure dates back to 1799.  Glass cases display a range of artefacts found in the area. The fort also has on display sacks of spices such as dried chilli peppers, anise and cinnamon.

Seri Rambai Cannon – Walls of the fort are lined with canons of various calibrers and ages. Among them, the most impressive is the Seri Rambai Cannon. This canon is located to the fort’s north-western corner facing the sea. Cast in 1603, the cannon is made of brass and was gifted to the Sultan of Johor by the Dutch. In keeping with the local belief, women place offerings and flowers inside the cannon for infertility cure.

After enjoy a visit to the impressive and imposing fort, tourists who are wondering where to go in Penang can find many other interesting sites nearby to explore.

•    At the center of the roundabout near the fort, you will find the 60 foot high Queen Victoria Clock Tower. A rich Chinese businessman constructed this tower in 1897 in honor of the 60 year reign of Queen Victoria.
•    A pleasant walking area with a beautiful long lawn leading to the City Hall, the seaside esplanade adds charm and elegance to the scenic surroundings.
•    Also called the Penang Harbor Lighthouse, Fort Cornwallis Lighthouse is located close to the fort.

There are many exciting things to do in Penang. Tourists can use the local buses to get to Fort Cornwallis located at Georgetown’s northeastern tip along Lebuh Light. This fort is open to public between 9 am and 7 pm through the week and can be comfortably explored in an hour’s time. You can enjoy an added treat in the form of cultural performances all with re-enactments and costumes if you are lucky enough to be at the fort on any of the Saturdays at 6 pm.

Remember that Fort Cornwallis is a very important historical Fort in Penang and is valued for its rich heritage. It is important for tourists to ensure that the area in and around the fort remains clean and the monument is left in its original, pristine condition.