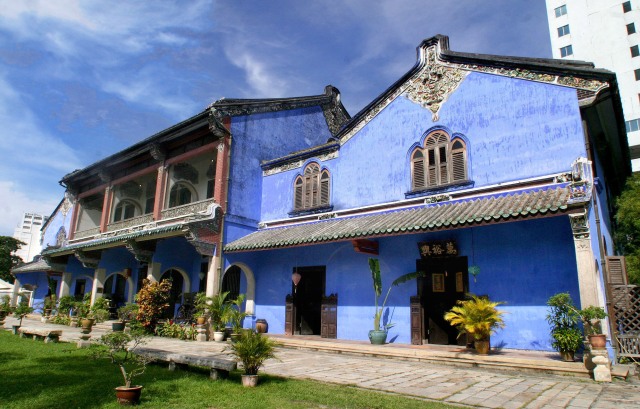 As you are travelling around George Town, especially around Leith Street, you will notice a distinctive indigo-blue building from afar. This would be the grand Cheong Fatt Tze Mansion (also known as the Blue Mansion) which was built in the 1890s for the preeminent Chinese businessman Cheong Fatt Tze (1840-1917). This elaborate and lavish mansion was designed to reflect his high status in life in terms of scale and luxuriousness. Every inch of the mansion was carefully planned and all the artisans as well as building materials were shipped and imported from as far as Scotland. However, due to the lack of maintenance, the house had fallen into severe disrepair in 1989s. Thankfully, a group of preservations managed to gather the funds to purchase and save this heritage site from possible demolition. After much investment in restoring the mansion, it remains until now the best tourist attraction in Penang.

Tours around the central parts of the house is only available 3 times a day at 1100H, 1330H and 1500H for RM 12 per person. Also, the mansion is currently providing bed & breakfast as well for those wishing for a historical experience staying in Penang. There are in total 16 designer rooms and room rates range from RM420 to RM800 with breakfast for 2 person per night. Additionally, you can rent the entire house for various events such as dinner parties, concert performance and weddings. Rentals range from RM3,500.00 to RM14,000.00 depending on the scale of your function as well as length of time. Be a part of Penang’s history by having your own historic moments in Cheong Fat Tze Mansion. You can be assured that your event will be like no others.

Stepping in through the lavish door, you will be greeted by the marvellous Western artisanship within the traditional paradigm Chinese courtyard house. It is noted that the entire mansion was designed and built according to the five elements: metal, timber, water, fire and earth. Cheong had consulted several Feng Shui masters in each aspects of the design before constructing the mansion. According to the principles of Feng Shui, it is important to allow natural energies, such as water and air, to properly circulate in the house. Thus, numerous changes were made to ensure that the mansion have access to ample breezes and the flow of water around. As you are admiring the unique architecture and craftsmanship inside the mansion, you will be surprised with the sunlight and breeze touching even the deepest corners, creating a cooling calming atmosphere.

It was in year 2000 that Cheong Fat Tze Mansion received UNESCO ‘Most Excellent’ Heritage Conservation Award followed closely by ASEANTA 2004 Excellence Award; Best ASEAN Cultural Preservation Effort. This mesmerizing mansion has captured the hearts of all its visitors and inspired several great films such as The Red Kebaya and The Blue Mansion. Its historical background and remarkable beauty amplifies the local beliefs and virtues, awakening the Asian’s deep mindsets on family values, nepotism, religion and the concept of patrimony. Enveloped by such amazing environment, you would wonder what kind of story the mansion itself would tell if given a chance. It would seemed that every part and pieces of the mansion, from the stained glass with Hokkien ‘Chien Nien’ work to the Chinese calligraphy against trope l’oeil timber beams, has its own secret to tell.

It is natural to have the urge to take ample pictures or explore the area alone while you are inside the Cheong Fat Tze Mansion. However, do respect and follow the rules provided by the locals. Visitors are not allowed to take pictures nor are they allowed to explore the premises without a guide. Remember that local people have different rules as well as ways of thinking, getting offended when they ask you to put away your camera or stay in the tour is not responsible travel. As you are listening to the tour guide, you are actually enriching your experience as well as knowledge regarding the mansion. Be attentive and cultivate the habit of asking questions, you will have a better understanding on the matter rather than assuming it. Be an eco-traveller and share your historical experience at Cheong Fat Tze Mansion among your friends and family or in any responsible travel sites. By sharing your experience, you are preserving this inspirational heritage sites for generations to come.

Check out on green projects initiated to promote environment conservation.